skip to main | skip to sidebar

Well, It's been far too long since I've posted. I've been being boring again. I'm procrastinating on learning Dreamweaver, so I've been knitting like it's an addiction. Even worse, I've found enablers at a wonderful community called Ravelry. It's for any fiber hobby-ist, but it's still in beta, so you have to request an invite.

It's been so nice to just sit and knit and read. But, I feel like I should contribute by actually taking pictures of what I've done. Only, it's been too cold to be outside unless I'm moving wood, or just not sunny enough to take good pictures. I really don't want to be playing with light boxes, so it's all just on the "to do" list.

So, back to ignoring Christmas and cleaning all the UFO (unfinished objects) out of my closet. If I really want to propagandize - I'm really doing a deep clean on the big closet, right? Yay, me!
Posted by Unknown at Saturday, December 15, 2007 No comments:

The second collection were things that were being blocked and finished in a big rush for the fair. I got distracted when sweet hubby accidentally *FELTED* a lace shawl, but I can't kill him - it won first place.

Picture one and two - same blanket - lace made of baby yarn. I really should spring for the good stuff, but the new mommy was just thrilled that it was washable. Third and fourth are a white yarn with pink and blue speckles. Five and Six are of one of my favorite sweaters. It's a poncho with arm shaping and turned out pretty well. I do get nice comments on it when Niki or I wear it. I'd like to do that again, but when I went to look for *SUBTLE* colors, I got distracted by pretty clearance yarn. I'll blog about clearance yarn later.

7 and * are a really nice blanket. I wish I'd put more work and thought into it, but blindly following an interesting pattern with cheap yarn got me an almost indestructible blanket. The cat has clawed it and slept on it. It's been tossed behind the couch and come up with no snags. I've worn it as a shawl around the house and it's almost too long for that, but perfect for a lap robe.

The last is the long storied map blanket. Yet AGAIN, it didn't make the fair because I can't find what safe hole I stuck the cursed beads in! Someplace perfectly safe and so secure that I can't find them again.
Posted by Unknown at Tuesday, November 20, 2007 No comments:
Ug, now I remember why it was so hard to keep a knitting blog. I really jump around too much to just keep one going. Firstly, I have a collection of projects at Wierd Kids http://www.wierdkids.com/gs/knitting.htm

The first is the Viking Turid sweater. It's a GREAT pattern, and I can't find it. Going thru the closet of UFO land, I've found several things that I put aside.
Posted by Unknown at Tuesday, November 20, 2007 No comments: 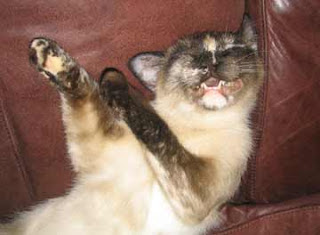 When Ickle holds still, she is one strangle looking cat. This is after a cuddle with the electric blanket and a good belly rub. She can sleep and purr with her mouth open, and we can do anything we want with her. I'm thinking that she's going to be a frequent flyer on "Stuff on my Cat" and the LOLcats at "I can has cheezburger."
Posted by Unknown at Friday, October 19, 2007 1 comment: 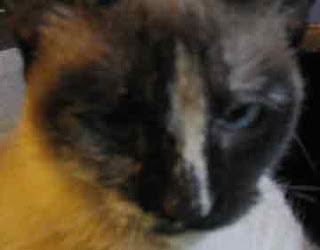 This is the Ickle. She was treed by the dog last week as a bag of bones with bad fur. I brought the dog in the house, got Niki into the house, and William went out and pulled her of the tree. She is DEFINITELY the most playful cat that we've ever had! On the second night, she'd been well fed and well rested, so wanted to play the game where the human wiggles under the blanket and kitty pounces. This little thing dove under the covers for my hand, and punched me in my NOSE!

All of the pictures of her are blurry because she barely sits still.

I like this picture because you can see her markings. She has one white eyebrow, mustache, beard and the crooked blaze down her nose. You'll see in the next pictures that her feet are spotty and even her tan colors just don't look quite "right". So, "Icky Little Kitty" has become Ickle and looks like she's here to stay. Mildred is NOT amused.
Posted by Unknown at Friday, October 19, 2007 No comments:

Well, I'm still running like crazy - but I did manage to move the wierdkids site onto a new program. The main pages are in Dreamweaver, but I still have to clean up the coding and make sure that all the pages work.

I'm thinking of adding more new stuff, and letting the kids make their own stuff. William has some pictures about the project he is working on - making a Halo helmet. Niki has quite a bit of art and concept stuff that she could put together. They've been working hard at avoiding anything that looks too much like schoolwork -
Posted by Unknown at Sunday, September 23, 2007 No comments: 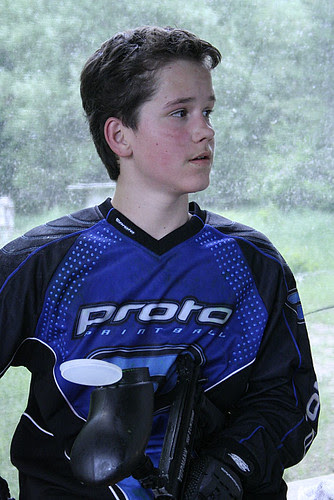 Yay, it worked!! This is Will all dressed for paintball. Doesn't he look all grown up??
Posted by Unknown at Thursday, July 19, 2007 3 comments:
Oh cool! I guess you do have to check these things constantly!! I found a great new site for having an RSS feed for my list of stuff to get to (don't worry if this doesn't make sense) - but blogger changed too. So, I had to do some jumping to get thru the hoops to get them to work together.

Now, my gmail works with blogger, chatspeak, and 30 boxes - Whoo Hooo!!! Now, if I just had a better mobile, then life would be good. Oh, and have everything able to update my main domain, and be able to download everything that I need to know about dreamweaver in one big chunk.
Posted by Unknown at Thursday, July 19, 2007 No comments:

I've been getting behind in my notes to myself (and anyone who cares to listen). I'm working - which is a drama that I won't flap about. I suppose the big news is that a new format is coming. One that is easier to change around and organize into something that looks like rational thought rather than someone's attic. Another is that I'm signed up for a blogger update, I just have to sit and figure it all up.

The cat is being passive agressive with her tail from the top of the monitor. I play a video game and the tail is over a corner. I surf and the tail is over the X. I'd get angry about it, but she is smirking at the same time. She loses the smirk when I poke her in the butt to move the tail - but they both wander back into place as she shifts around, dusting the top of the monitor with her belly flab. Yes, Mildred, I'm discussing feline flab on my blog. Nyah Nyah. If you've noticed, she is the star of the Menu site's anti-spam filter.
Posted by Unknown at Saturday, January 27, 2007 No comments:
Newer Posts Older Posts Home
Subscribe to: Posts (Atom)