skip to main | skip to sidebar

I'm supposed to be looking for ways to teach kids about running their
own planner and getting them organized and self-sufficient.

Instead, I ran across the improvements in Google Desktop. WOW!
There's crap in there that I didn't know I needed. Did you know that
you can tell your computer when you toss in a load of laundry, and
it'll tell you when the washer should be done!

Google Gadgets http://desktop.google.com/plugins/sidebar/
So far, I like the sketch pad for notes, the to do list, and the photo
thing (not sure what that was called), and I have to restart to get
the laundry one going. (I wonder if it tracks how many loads? Maybe
it'll buy me a drink when I hit 100
Posted by Unknown at Wednesday, August 16, 2006 No comments: 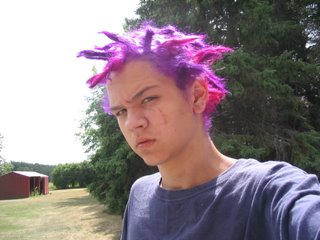 Rather like icky cotton candy - isn't it?
Posted by Unknown at Wednesday, August 16, 2006 No comments:
Took some time to get my house in order, and quite a few things happened. First, I have to update the "wierd hair" page. Leo decided to dye the dreadlocks pink and purple. It looks like he got a swirly in a cotton candy machine. Ok, I've found a zen about his hair - but my shower was purple. Not a little purple - the entire bottom half was purple. It took four tries and a female friend, but he did finally get it back to white.

I don't want to tread on feelings here - but this is important to me. Kids at my house do quite a number of different things. One of the big ones is bike riding. There's a golf course where they can play or just get a soda, and the bike trail system right close. One of the friend's was supposed to be picked up at 9am - so he was ready at 9 am. Finally at about 10:30, I call his mother and he was supposed to be at practice at 9am. She said she'll get him in an hour or 2. Never showed. About 3ish, we had to grab something for dinner, so I had her son try to call her. I heard yelling, and I think she hung up on him. So, I told the father what we were up to, and gave him my cell number. Took the dog, went to a park, grabbed chips and home for dinner. Mommy dearest rolls up at about 9:30 having a temper tantrum. Apparently, they'd missed me at both numbers and just never tried back. Uh, I don't have an answering machine - my voice mails get bounced to email.

(Put coffee down) This is a para (helper) who is supposed to be kind and patient with special ed kids in the school district. Ick, icky ick.

So - what to do? I'd like to perserve the boy's friendship, but I really do not want to deal with this again. Plus, if she rants and raves like this at an adult - then how does she speak to her kids? I already know what her son's self esteem is like - is it only a matter of time before he starts acting out?? This stuff is leaving me sleepless. I pretty much expected an apology the next day, and nothing.
Posted by Unknown at Wednesday, August 16, 2006 No comments:

Excellent Article at Salon. You do have to watch an ad to read all of the articles, but it's still better than registering for spam...

This week, you turned 25. We've spent a lot of time with you over the years -- we're 25, too -- and we wanted to wish you a happy birthday. But we also want to say something else. It's a request, really, or a plea:

Please. Stop. For the good of the country, stop what you're doing.

Posted by Unknown at Saturday, August 05, 2006 No comments:
Why is it so difficult to keep jumping? One obstactle - ok, two - ok -- but when the stepping stones get higher and higher then even the little ones can feel like you need a cheering section and a vaulter's pole.

I'm getting rather tired of the blog-sphere. I'm trying to think of how we can do a rating system and an RSS feed like Daily KOS - only set up about the things that I want to read. Some days I might want to dig into politics and understand why the estate tax had to be tied into higher minimum wage in an "Up or Down" style vote. Some days, I really just want to read about someone's cat or a toddler being sweet. Even sillier - I wanted to skim someone's blog to see if I was mentioned. (Yay - I was! But no link :P)

Today, I did the "blog jump" where you just keep hitting next blog, next blog until you find something that you do want to read. I found a beautiful one where some woman was be-moaning about her step-son's drug problems. I would have loved to echo that with links to the proposals that I read about on BBC to make all prisoners do some type of re-hab and/or address learning/emotional problems. Maybe that woman would have liked some words of support - or just to know that someone heard her anonymous journalling. I would have liked to have lined up a nice little essay somehow about programs that work and programs that just warehouse people.

Or - maybe I'm just avoiding sitting in a noisy crowd again. I did it last night, and took pretty pictures (over to the right under the flicker thingy) - but all day...
Posted by Unknown at Saturday, August 05, 2006 No comments: 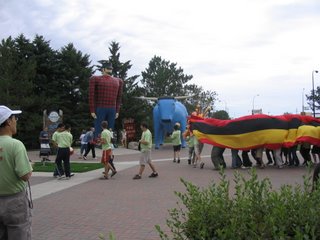 The Dragon boat dragon meets Paul and Babe.
Posted by Unknown at Friday, August 04, 2006 No comments: 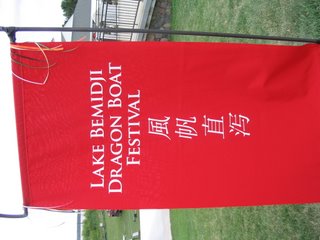 It was spun when I started. That's ok. I did get a bunch of good pictures. The dragon boat thing is very cute, and many of the local companies did a great job putting together teams.
Posted by Unknown at Friday, August 04, 2006 No comments:
Well, we're just about ready to head over to the Dragon Boat festival I want to go over before things get too crazy and take lots of pictures and video.

I did start a new project for next year's fair. Super Spiral from "A Gathering of Lace" by Meg Swanson. But, I'm cheap. I'm making it with $5 in yellow baby yarn. It is *SO* soft and pretty.

The story behind this shawl for me is really neat. I started a dark, shiny grey version of this 2 weeks before Katrina. It took me ages, but I did finish. I could barely look at it without thinking about people on the roof. I ended up getting into Project Linus and donating a bunch of the things that weren't completely loved. This year, the heat has been horrible. I'd bought yellow yarn for a 1/2 sweater/shawl thing, but they just didn't work. So, I got to thinking about honoring the sun, and started another spiral. I'm hoping that the warmth of this summer will carry over nicely when I'm wearing the shawl this winter.
Posted by Unknown at Friday, August 04, 2006 No comments:
Newer Posts Older Posts Home
Subscribe to: Posts (Atom)